This book comes full of photographs and illustrations which will back up the stories you have been telling everyone about at home for  years which they may have found hard to believe but, it’s all in this book in Black and White – Warts and ALL – with all the Hard Knocks. Tales like getting tipped out of bed to being beaten up in bed are all covered in this book along with the amazing sporting achievements of your fellow apprentices.

1. The HARROGATE Army Apprentice – OUR STORY – There have been a number of books about Army Apprentice Colleges over the years but in this book, Fred Carslake captures for the first time what it was like to be an Army Apprentice, as seen through the eyes of Apprentices at Harrogate. Though he focuses on a particular intake – 57A – his book nonetheless brings to life the environment, the camaraderie, the training, the sport, the social life and the trials and tribulations experienced by Army Apprentices across the decades. As a member of Intake 63A this, has certainly painted a vivid picture of my experiences!

That is not all. What this book does in a very subtle and unassuming way is to show just what life as an Apprentice did to those young men. The training at Harrogate succeeded in turning very young, naïve school boys into educated, robust citizens and soldiers, who went on to serve their country well, many with distinction. I commend this book.
Major General John Stokoe CB CBE Ex Apprentice.

2. When I completed my book, the ARMY APPRENTICES HARROGATE, in 2002 I did not believe that I would see another history relating to ‘Penny Pot’. However, Fred Carslake has compiled an excellent record of a different nature, which he has put together in an interesting and often humorous way. This gripping book relates the military careers, reminiscences, recollections, and on-going life experiences of many Apprentices. As such, there is an important element of social history. Although the history is cantered on his own time at Harrogate, he has sought input from across a wide range of intakes. There is something here for everyone. Many of those who trained at Penny Pot will recognise what happened to other intakes. For me as a member of the permanent staff, and I am sure, for many others, it is very interesting to view the life of an Apprentice as seen in retrospect from ‘inside’. Modern soldiers under training would hardly recognise it. Life in the Army has changed: not necessarily for the better or for the worse just different. This is an excellent book to read and Fred Carslake should be congratulated, on this fine achievement.
Colonel (Retd) Cliff Walters the last Commanding Officer at the old camp.

3. What is The HARROGATE Army Apprentice, ‘OUR STORY’ all about? – well Fred Carslake, over a 14 years period, assembled a large number of circumstances and anecdotal material, giving a fascinating insight into the everyday life of the Army Apprentice in the late 1950’s and beyond. This is a highly informative and most interesting book to read and I bought two extra copies for other members of my family to read.
Steve Stokes (Major RE Retired) Ex Apprentice.

4. I was really impressed when I first opened our book it’s not often I would pay £15 for a book at all let alone one of our own but, when I saw the size of the book and the amount of A4 pages (200) I could see it was money well spent.
I liked the balance of the book and particularly the ladies input with their outlook on their service lives, we all know it is not easy to be an army wife especially with the amount of separation that it entails at times and it is true. The army is like being in a big family and it shows the sense of humour needed throughout their time. It was interesting to see just what other people went on achieve and note the variation of their corps and postings.
I would conclude that the book was so good I have donated the price of another book to someone whose husband has died, as a gift to give her some sort of idea that her husband got up to in his younger days. It was been sent to Sheila Watson wife of Ron Watson who was in the Royal Signals.
Mick Cotton (Ex WO2 RE). Ex Apprentice.

5. What a ‘Treasure Trove’ — I could almost smell Penny Pot Lane, the camp where it all began as soon as I opened this book and what a turn round I posted my cheque on a Monday afternoon and got my book two days later on the Wednesday.
Alan (Harry) Hunt. Ex Apprentice.

6. Fred Carslake spent fourteen years of his life coming up with the ideas and concept of this book. He was able to track down and contact many old army comrades, with the object of getting them to write contributions for the book about their individual experiences of their time as Army Apprentices.
The result is a collection of articles by ex-service men now in the autumn of their lives, recalling their time as Army Apprentice Tradesmen during their teenage years in the late 1950s. The book also deals with the history of the Army Apprentice School Harrogate from its opening in 1947 to its closure in 1996, when it was then known as the Army Apprentices College Harrogate.
This highly recommended read is a collection of facts and highly amusing reminiscences, which can not fail to be of interest to anyone who was a boy soldier there or a member of the military or civilian permanent staff. In fact, anyone that has had any connection to the place, during the nearly five decades of its existence will identify with this book. As would the many thousands, of ex–service men who started their British Army careers at any of the four Army Apprentice schools; Chepstow, Arborfield, Carlisle or Harrogate.
The modern day boy soldier entrants to the Army Foundation College that now stands on the site of the old Apprentice school barracks in Harrogate will find the contents an interesting comparison to their modern day army life. Indeed, even civilians, both young and old, can’t fail to be entertained by the realism portrayed in the stories by the original ‘Virgin Soldiers’ who entered that place, often as young as 15 years old.
Charlie Train (Ex Cpl RS) Ex Apprentice.

7. Congratulations on an excellent book Fred. Although I am now Harrogate Council’s communications manager, I was for many years the Mayor’s Secretary. I had regular contact with the Army Apprentice College and of course the Foundation College. The College is a huge and welcome presence in Harrogate and the young soldiers play a very important part locally.
It was good to read the book and remind myself of the long and valued history between the College and the town. Indeed, I remember the beautiful sundial, which the College gave to Harrogate when it closed for a short time and transferred to Blandford. The sundial is a joy to look at and I remember it going in on a huge ice block so that the sculptor could be sure of its finished position.
As well as offering labour when asked for help, the Remembrance Sunday Parade and the College’s Freedom Parades also bring great pleasure to locals and visitors alike.
It was good to read about old colleagues, particular Colonel Cliff Walters who I helped when he was writing his history book, which I recently saw in the window of an antiquarian bookstore in Harrogate! Old the College may be but as fresh as ever and certainly, for old comrades, Fred Carslake’s book will bring back many happy memories.
Lynne Mee Communications and Media Manager
Department of Corporate Policy & Improvement Harrogate Borough Council

The book can be bought from me for just £15 plus £2 P&P at the above address.

If you fancy a chat please get in touch …… 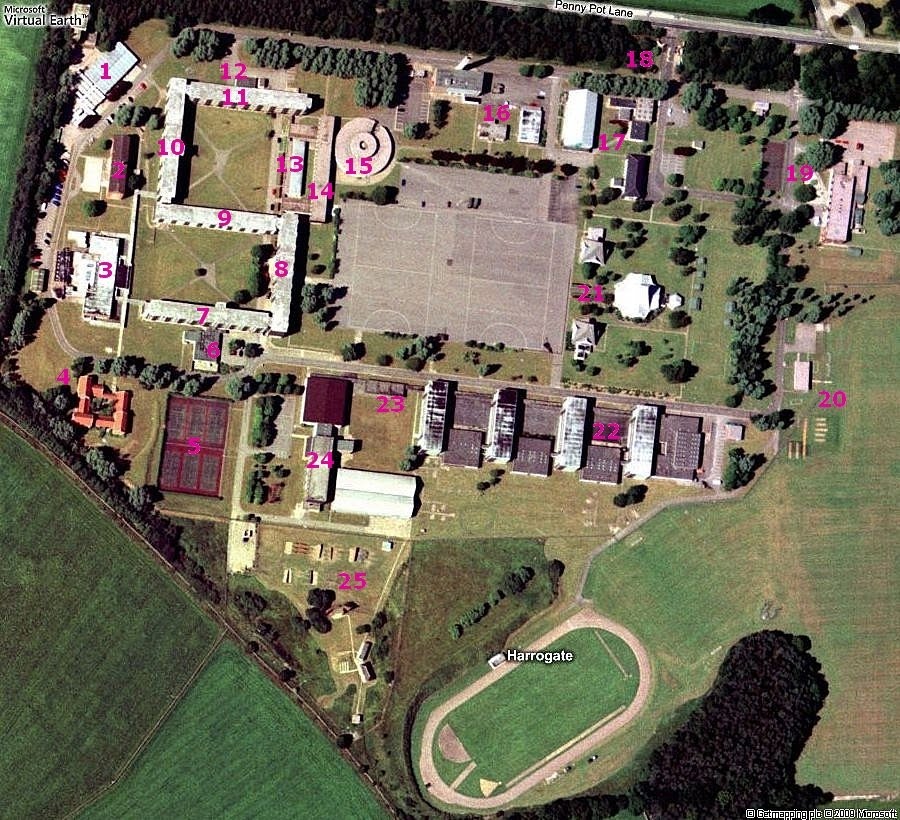 I just stumbled across this website which I found interesting. It appears to be a database of some sorts using Google sites. I think it just lacks the ability to add a contact email for people to get in touch.

Well done though whoever it was that did it.